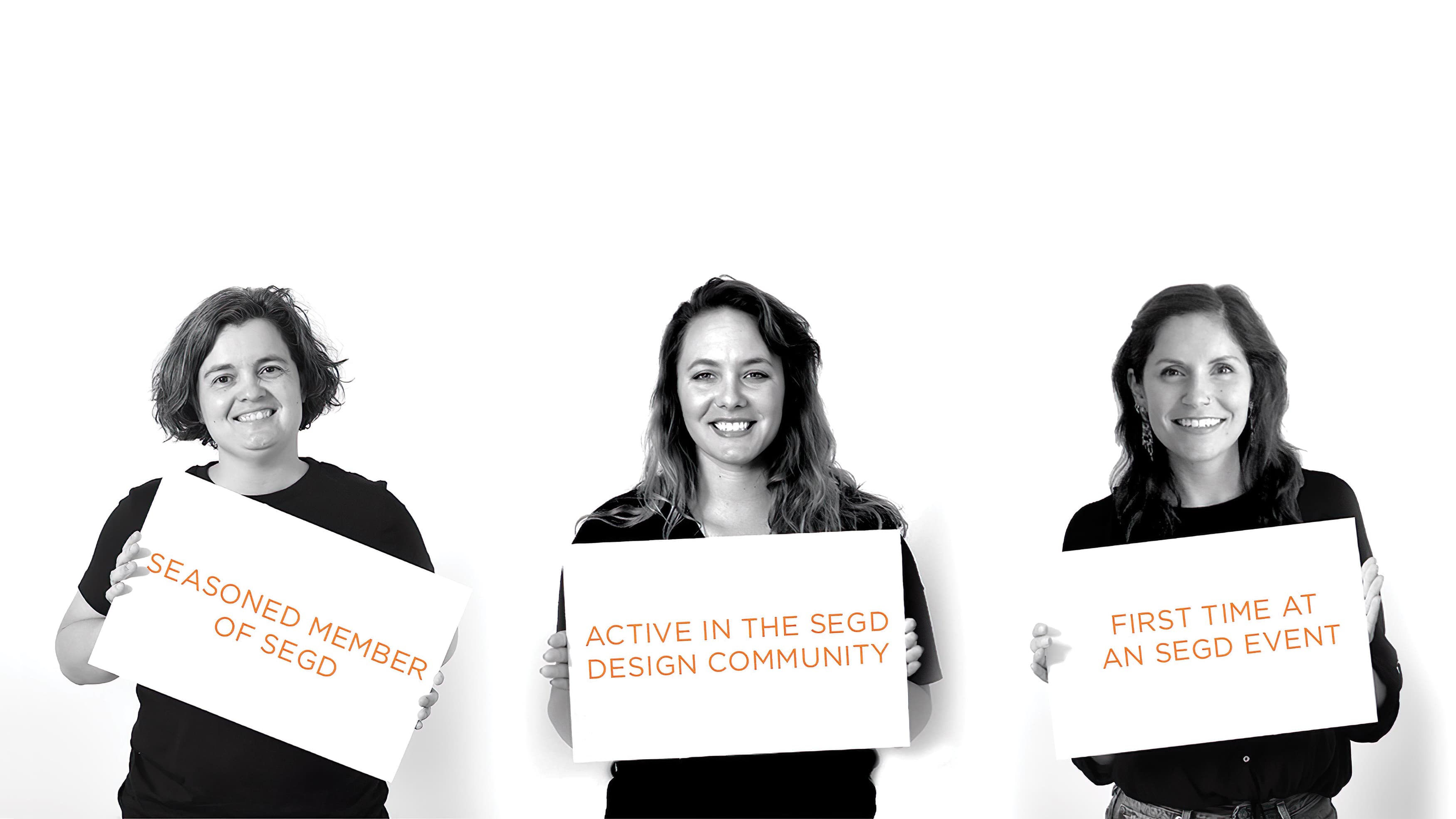 Insights From Our Experience at the SEGD Wayfinding & Placemaking Conference

Our designers attended the Society of Experiential Graphic Design (SEGD) Los Angeles Wayfinding and Placemaking conference on July 20, 2018. This gathering was a global event focused on urban, regional, campus and transportation signage design.

Designers as Advocates for Users

As someone who’s been thinking about signage for years, it’s particularly important to me to find ways to stay inspired and keep the work fresh. The last thing I want to do is turn to a formula.

From the speakers at the conference, I kept hearing talk about the role of designers as advocates for users. Within a team of consultants, the role of Environmental Graphic Design (EGD) is unique in its reliance on a temporal and physical understanding of the experience. One of the speakers, Frost Collective’s Urbanite Studio, presented a process for diagramming these needs, using the rubrics of Think, Feel and Do.

As designers, we have a unique capacity to abstract this empathic view of users — to draw it out, break it down, and share it in a way that others can understand. How we translate the user’s point of view is an important part of the process. If leveraged right, this approach can guide decision-making in a transformative way.

Wayfinding Aesthetics: Standing Out vs. Blending with the Context

Within the discipline of wayfinding, the lens has typically focused on complex spaces, such as municipal, transit, and hospital applications. Within these environments, the type of users and information has created a strong universal vocabulary that aims, first and foremost, for clarity.

The visual language is highly systematized with an analytical approach to messaging, legibility and the organization of information. From the roster of speakers, the Milksenar studio most fits into this view of wayfinding. One idea that they strive for is to be unnoticed.

What struck me at the end of the day is the range of approaches that were shared. Wayfinding today bridges a spectrum from this international modern approach to more eclectic styles represented in the work of the studios, Egg and Newsom Gonzalez.

Within each of the environments reviewed, the users and their goals varied widely. The priority on intuitive approaches to wayfinding as presented with the University of Southern California project, for example,  suited the needs of that client and user group. Where the memorable landmarks as shown in the  Facebook restaurants campus dovetailed with a more neutral background of hardworking, simple wayfinding elements.

The diversity of design reflected the varying needs of our client groups and the abilities of the teams to tailor the application to address those needs. Clearly, there is no one size fits all.

I particularly enjoyed the presentation Christian Daniels from EGG gave on their work at the Facebook headquarters in Menlo Park, CA. I feel there were a lot of valuable insights he shared that can be translated into our everyday work environments. The site was a challenge because of its mile-long scale and the wayfinding strategies that the designers implemented were very functional and engaging… and cool! I particularly liked the maps on the floors showing you exactly where you were standing in the overall building, and I think walking through there and seeing your progress on the maps would probably be a truly great wayfinding experience (you think you’ve walked a long time but that dot hardly moves!). The simplicity of the wall signs also recalls how Facebook used to be: very simple, clean, and easy to navigate.

Another exciting part of their presentation was when the team talked about the design of each of the restaurants and their identities, especially Full Circle. They went through so many iterations of the designs, easily could have stopped at any of them and come out with a fine solution, but kept pushing their ideas into further development and ended up with something that was probably better than imagined – Fiestaware as signage has never been more fun!

The conference was inspiring because I feel that many times when I come up with a solution that works, it’s like an end game for me. However, if I continued to push through and continue working on it, better results are created. Time doesn’t always allow for that but it’s a good reminder that if you take the time to do more, things do get better, and that the first good answer isn’t always the best.

I did not know what to expect for my very first SEGD event. It felt great to be in a room full of other people who have the same passion as I do. All the presenters had a unique way of sharing their work and creativity. It was interesting to see which projects used a cleaner and simpler approach and which ones used more detail in the design.

I feel every job has its own personality based on what the client wants in the end for the user. Airports, college campuses, and city wayfinding were some of the projects presented that had a clean, bold, and modern approach. It makes sense because in these environments the user is getting from one place to the next and we as the designer want to make that path as simple as possible. Our end goal is for the user is to not have to think too hard about how to get to their destination.

Projects that have more detail and complexity are very different than basic wayfinding. Memorials, art districts, company headquarters, and restaurants can be very hip and detailed. You are there for a reason and usually are not passing through, so the user has time to take in the surroundings. The use of different materials specific to the project can be a game changer. For example, the plate wall at the Facebook headquarters cafeteria was, of course… designed with plates!!! I find myself overthinking projects like these because I want them to turn out super cool and to be memorable. If you take a step back and think more simply it can be a great help.

The presentation that EGG shared stood out to me. The designer was in architecture school on the east coast. He found himself wanting more… more creative freedom, a new environment, and a new perspective on design. I was in Madison, WI wanting the same things.

He spoke a lot about getting off the computer and out of the office to find inspiration in everyday life. Moving from Wisconsin to California, I found inspiration in places I never would have seen if not for the trip. Sleepy tiny towns in the mountains to rooftop bars in Hollywood gave me a spectrum of everyday design. There are many different lifestyles in the world and within those lifestyles is design to fit that community. Seeing how experiential design reflects a specific population is key knowledge to have while connecting with clients and their ideas. You have to experience different cultures and communities to create exceptional design.