Two guys in a bar and a gal on a boat. Isn’t that how every great partnership begins? 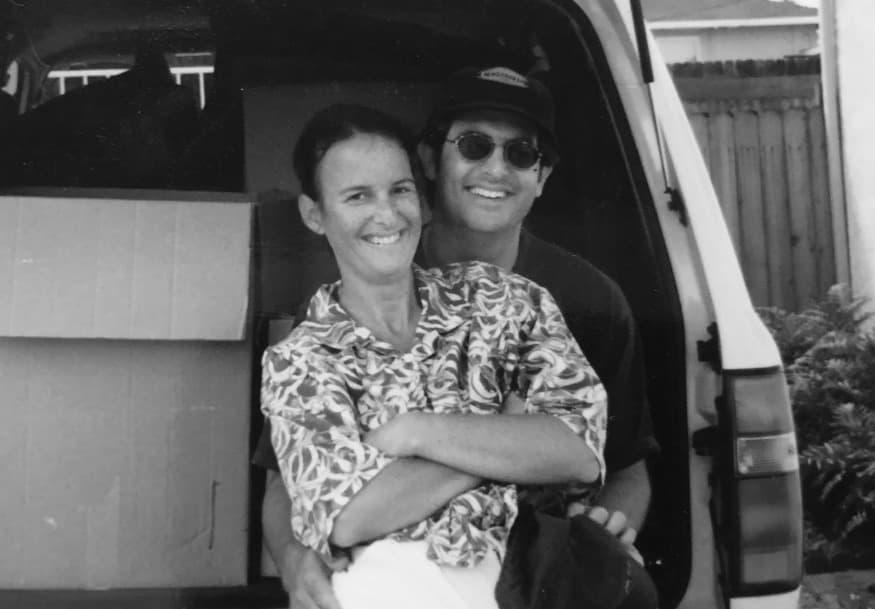 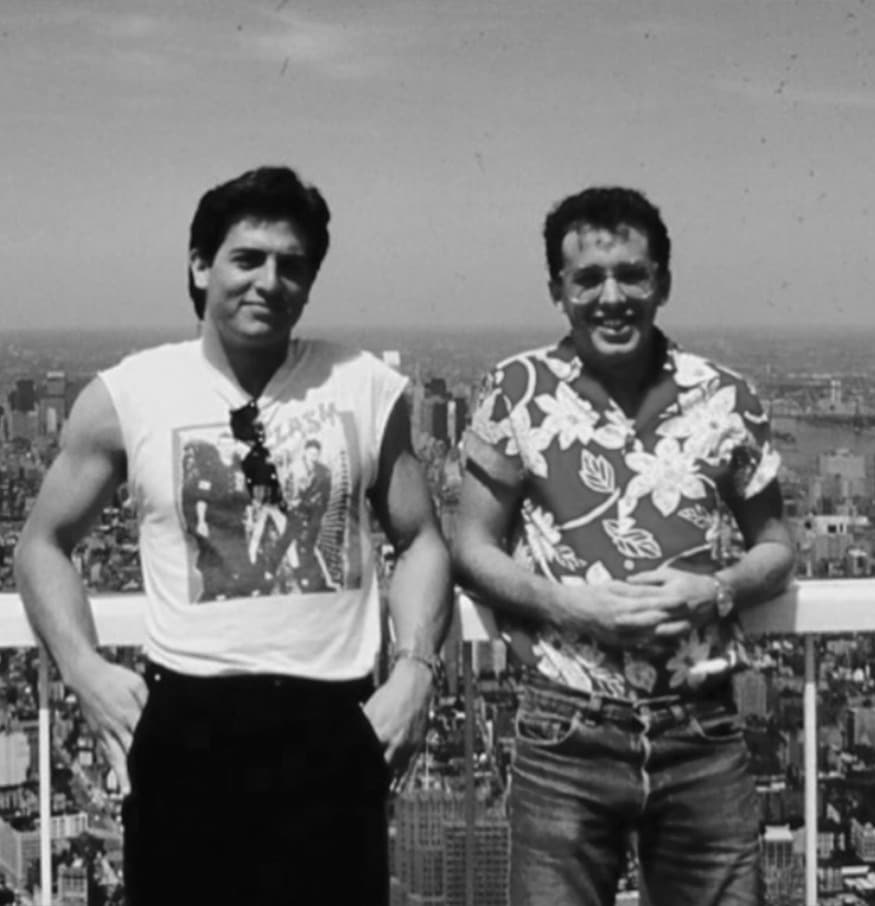 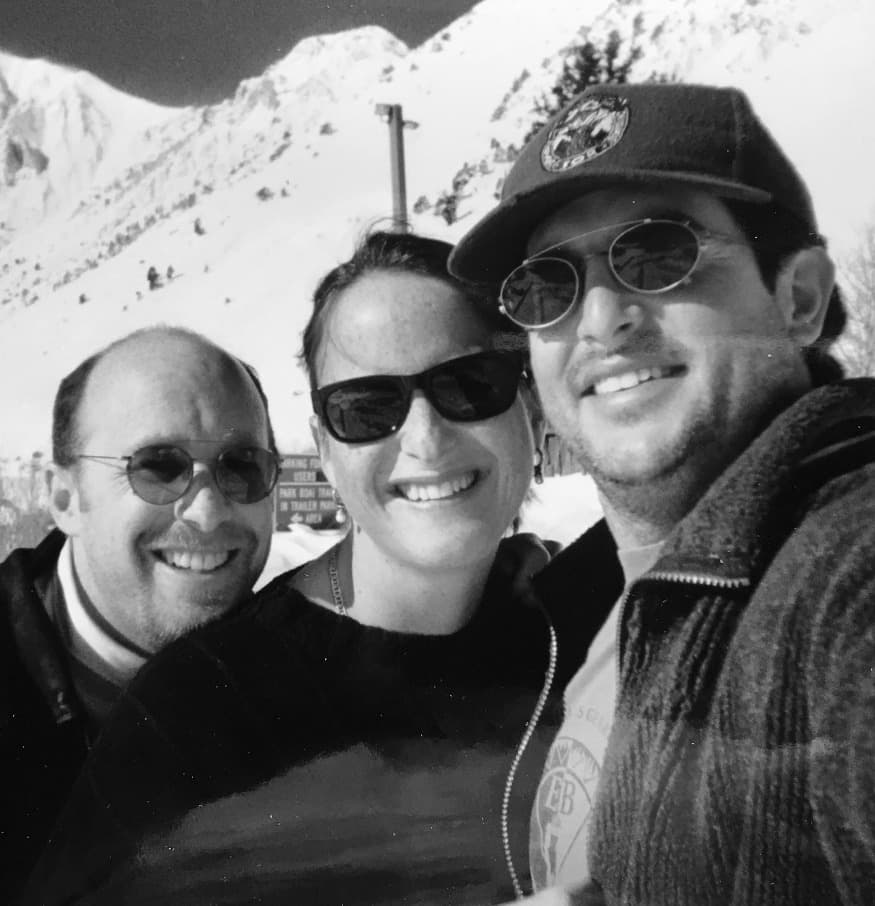 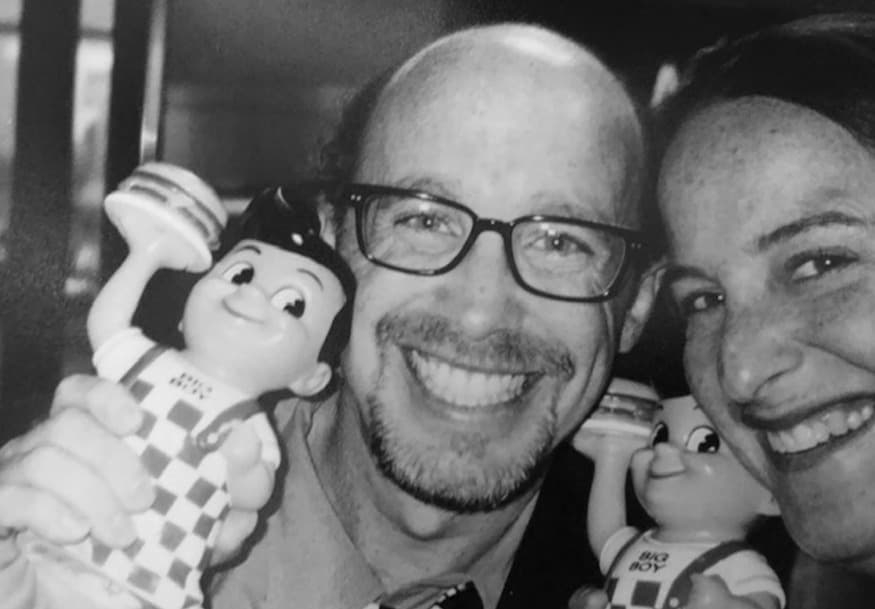 Sporting flipped collars and bomber jackets, Martin Schwartz and Harry Mark, both design & architecture enthusiasts, met in their second year of architecture school at the University of Texas in Austin. Impressed by Harry’s thoughtful process, artistic ability, and exceptional solution on a class project, Martin invited Harry out for a beer. With a mutual passion for all things design, the pair quickly formed a bond, a band, a comical model-building business, and an enduring friendship.

Meanwhile Suzanne Redmond, a Southern California native and business major at the University of California, Santa Barbara, set sail for a Semester at Sea after tragically losing a close friend. Using the study abroad program as a healing escape, Suzanne enrolled in an art class and unwittingly poured her emotions into her sketch book. Upon seeing her profound interpretations of the journey, Suzanne’s art teacher was blown away by her conceptual thinking skills and convinced her to not only change her major but to also apply to the renowned ArtCenter College of Design in Pasadena. 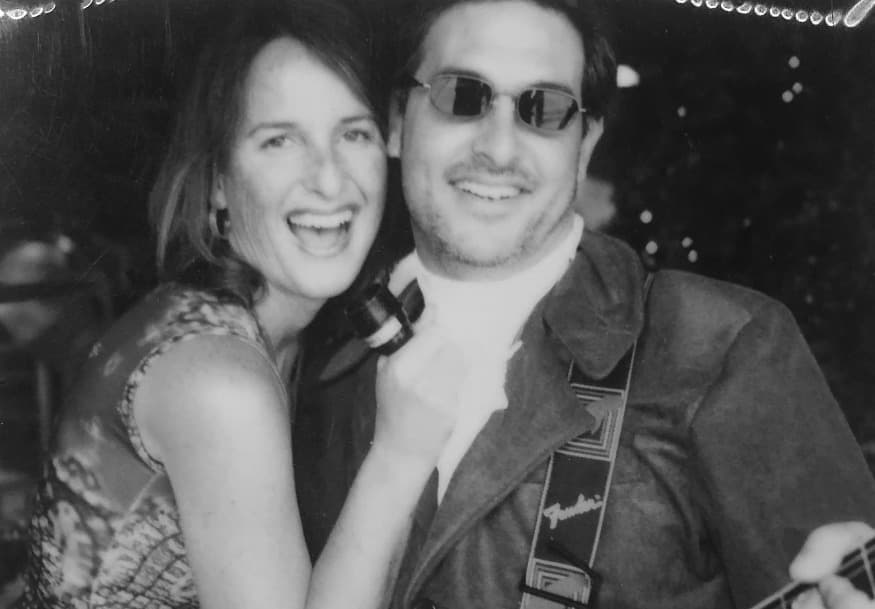 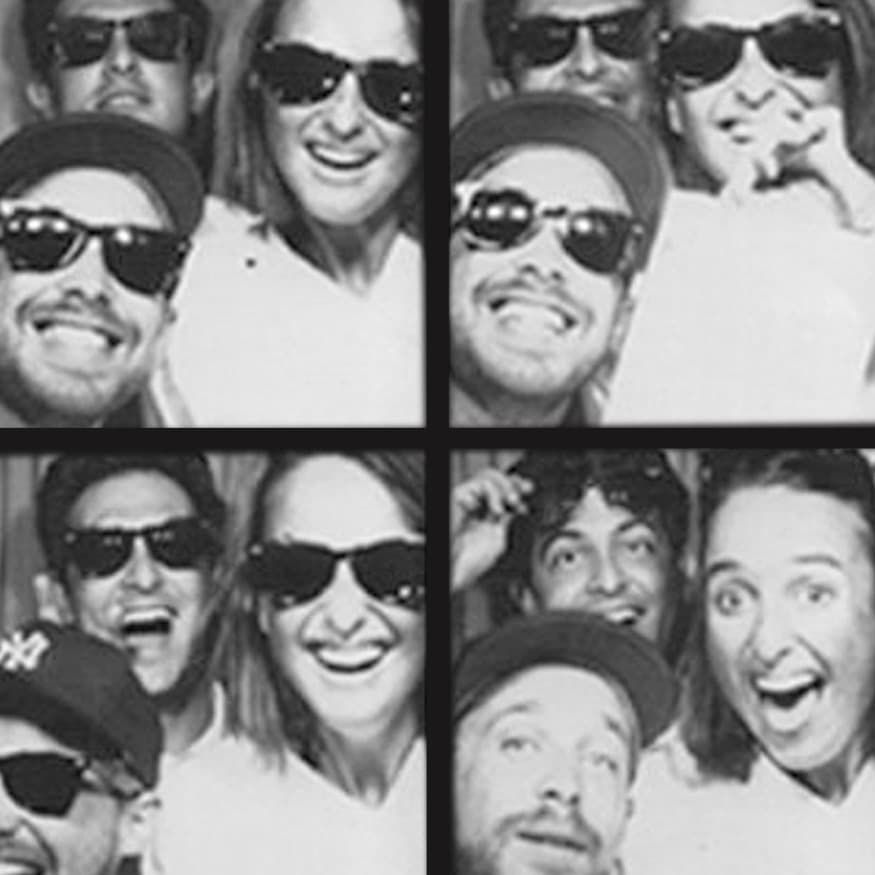 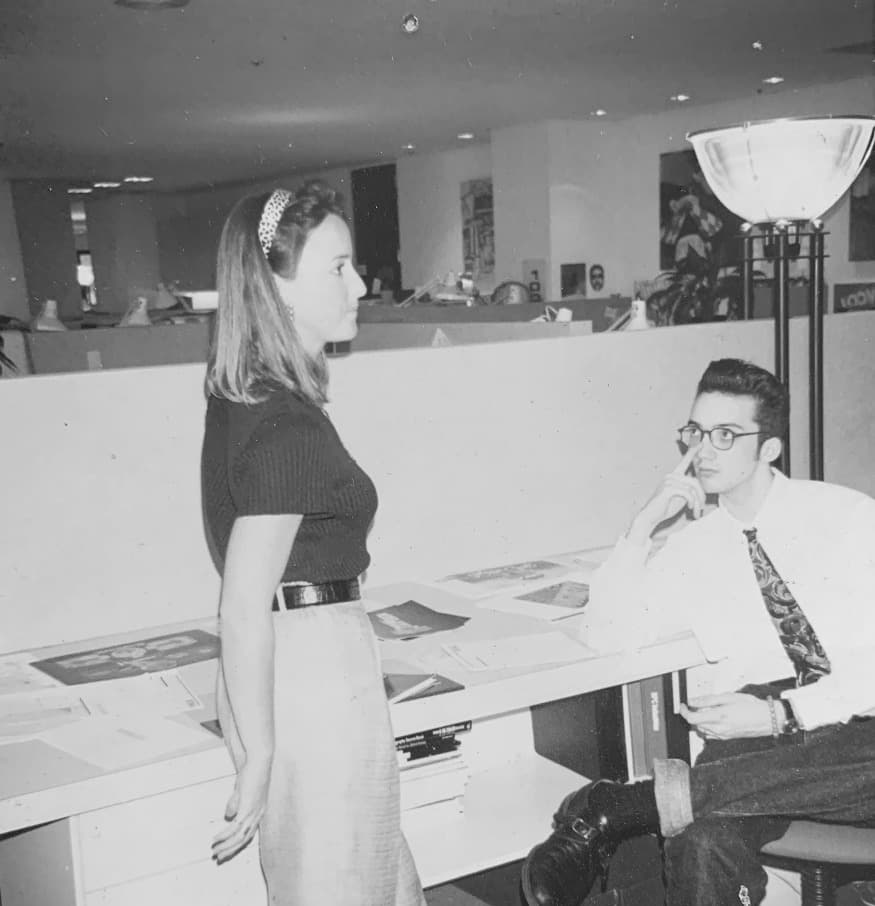 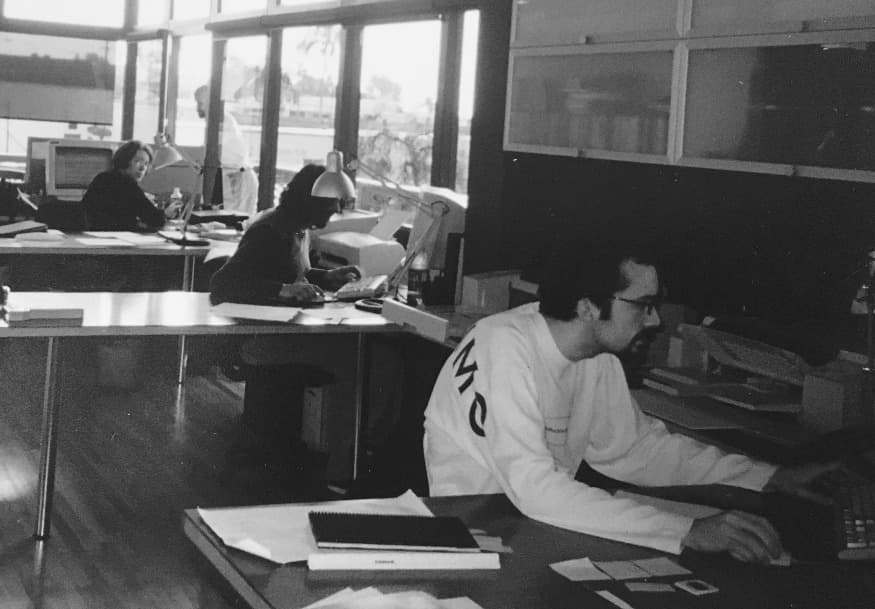 “With a mutual passion for creative design, the pair quickly formed a bond, a local model building business, and an enduring friendship.”

Together in the Lone Star State

With an art degree in one hand and an impressive portfolio in the other, Suzanne signed up for every interview opportunity the ArtCenter offered and received callbacks on all. Her first choice, a design firm in San Francisco, ultimately didn’t have an opening for her, but encouraged her to take a position at RTKL so she could enhance her branding and design skillset by learning environmental graphics. Viewing the opportunity as a paid graduate degree, the California girl agreed to head to Dallas for “two years tops.” That was before she encountered a young Martin pulling up to a party on a motorcycle in ripped jeans, black boots, and a guitar on his back. Two years in Dallas was suddenly negotiable.

Full of talent, energy, and global career-building opportunities, Suzanne, Martin, and Harry thrived at RTKL. Suzanne worked with a small team of graphic designers to help develop the Environmental Graphic Design Studio while Martin and Harry worked in the Architecture Department designing retail and hotel projects around the world. With a blurred line between the two divisions, it was an exciting time of cross-disciplinary collaboration and camaraderie.

“…it was an exciting time of cross-disciplinary collaboration and camaraderie.”

“kindness, tough love, and quirky yet lovable process of design.”

Yet at the two-year mark, Suzanne found herself restless – and hot. With the AC failing in her car and apartment, she announced her intentions to go home to Southern California, but a wise Martin got on one knee and planted her feet back in the great, but sweltering, state of Texas.

Good thing as she would have missed out on meeting Cody Clark, a Texas native from a design-centered family seeking an RTKL internship while studying Fine Art & Sculpture at Pratt Institute in Brooklyn. That summer of ’92 led to a long stretch of crafting environmental graphic design and branding on projects all over the world under Suzanne’s mentorship of “kindness, tough love, and quirky yet lovable processes of design.” After five years immersed in global retail and hospitality projects at RTKL, a deeper graphic design education called, and Cody enrolled at Suzanne’s alma mater, the ArtCenter College of Design.

After 10 years at RTKL, Suzanne was offered a partner position with the company to help lead the Environmental Graphic Design Studio. The politics of a large firm were beginning to weigh on her, and having started a family with Martin, who had already departed RTKL to help run a family tuxedo business, the two ultimately decided to sell everything and start over in Southern California.

Harry too grew restless, traveled through Europe and Africa, and landed in Philadelphia to earn a cross-disciplinary masters focusing on Graphics and Architecture from the University of Pennsylvania. He landed a job at another international architecture firm, HOK in Dallas, but ultimately decided the corporate world was not his cup of oolong, and hung up his own shingle in Dallas.

Driving to San Clemente with two kids in tow and contemplating their future as potential bakery owners, Suzanne and Martin were interrupted by the ring of their footlong cellphone. It was Walt Disney Imagineering seeking Suzanne’s assistance with Disney’s first five-star, resort hotel in Tokyo. Thoughts of gluten-free cookies flew out the window and Redmond Schwartz Design was born.

“Thoughts of gluten-free cookies flew out the window & RSM Design was born.”

Knowing they’d need additional help, they called Harry back in Dallas, who, fed up with being a “marriage counselor” for couples while designing their homes, gladly jumped at the chance to join his friends and former colleagues, even if it meant crashing on the sofa at the home of Suzanne’s parents, Suzanne and Martin’s new home base – and office. 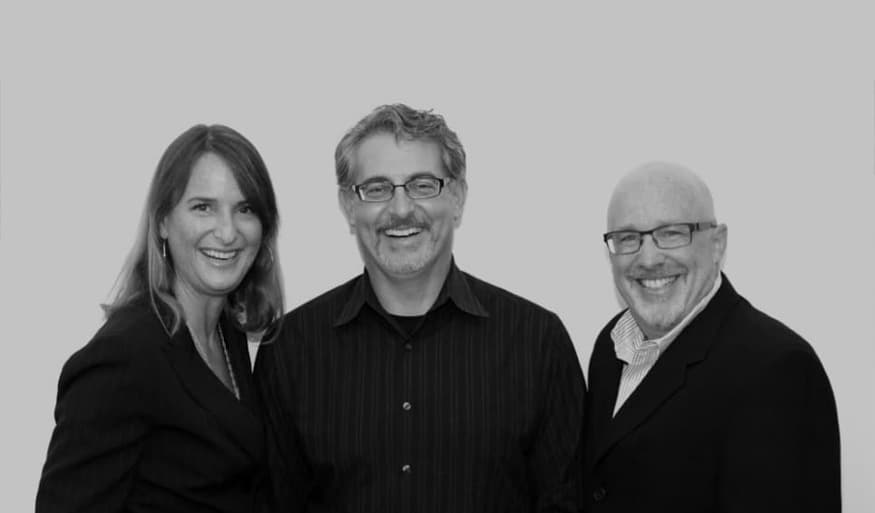 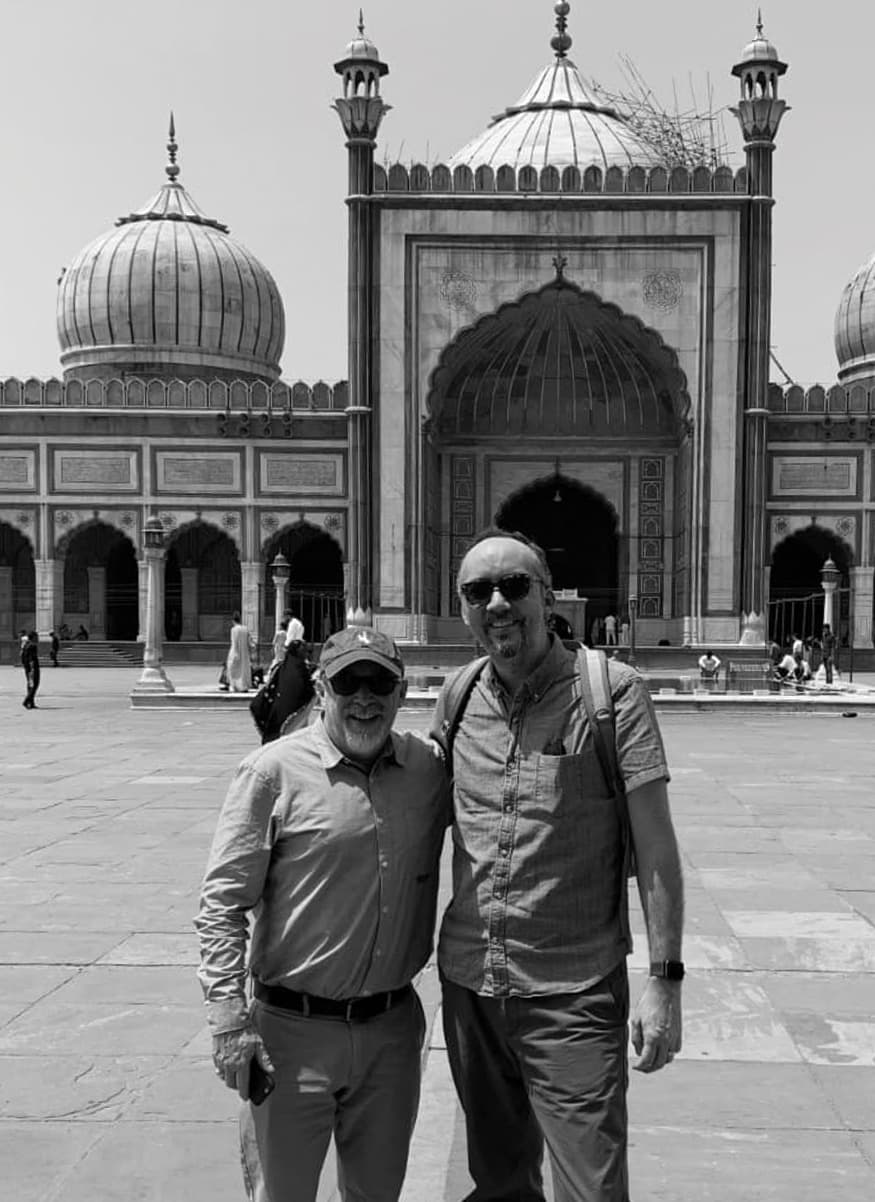 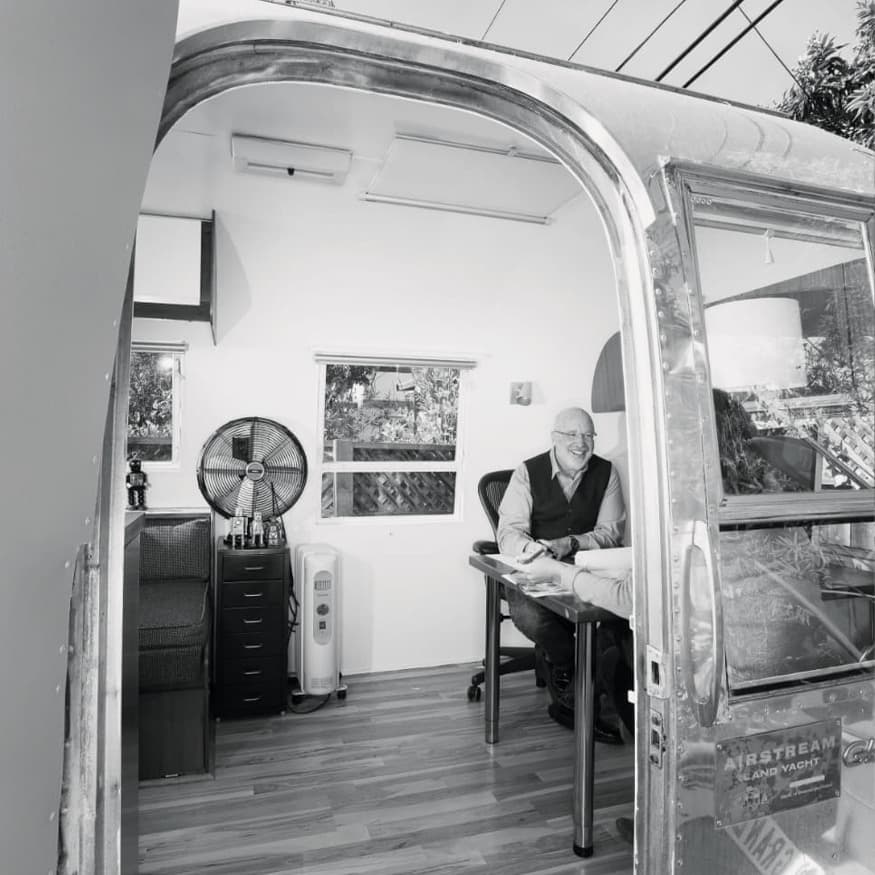 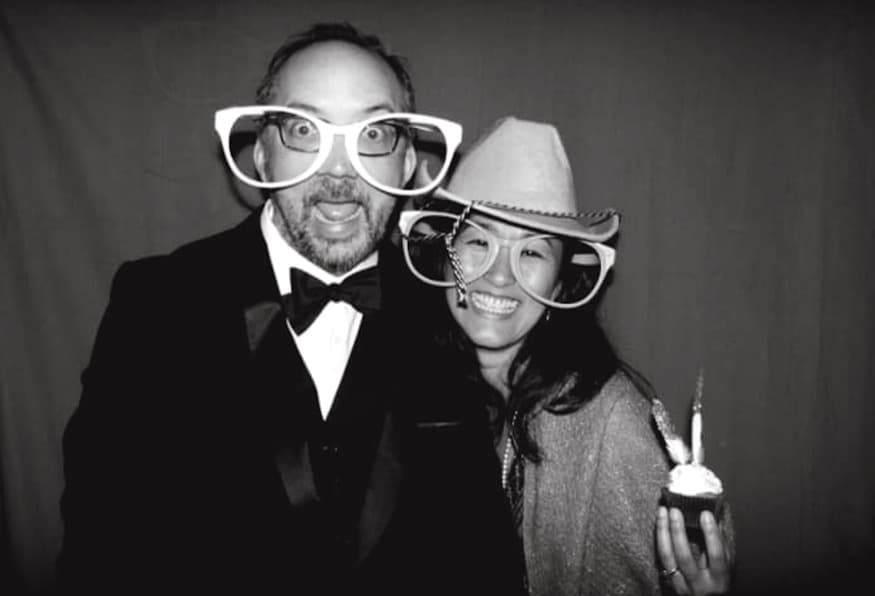 …with a borrowed card table and folding chairs, but the table wasn’t strong enough to support the big beige Macs, so they had to work from the floor. Suzanne’s father also donated a red Ferrari phone for their office line.

The first person hired to answer that phone was Stephanie Wills, a recent California State University, Fullerton grad with degrees in Communications and Art. Although she was drawn to the creativity of the company, and felt it was a perfect fit with her education, it was the line in the Help Wanted ad that read “shoes optional” that truly sealed the deal. Surrounded by incredible talent – including Cody Clark who joined the team after graduating from ArtCenter and wowing the New York design scene – Stephanie was a sponge and quick study in the world of environmental graphics. With her eagerness to learn in addition to her art and public relations background, it wasn’t long before she handed the Ferrari phone to someone else so she could concentrate on bidding projects all over the world.

Fast, furious, and fun describe the early years in San Clemente, especially the day Disney called and said they wanted to visit the garage studio. Suzanne frantically enlisted Harry to pick up the computers from the floor, as well as strewn diapers, toys, and cat litter. Luckily, Disney canceled the visit (and shortly thereafter, Harry’s name was added on the door.) 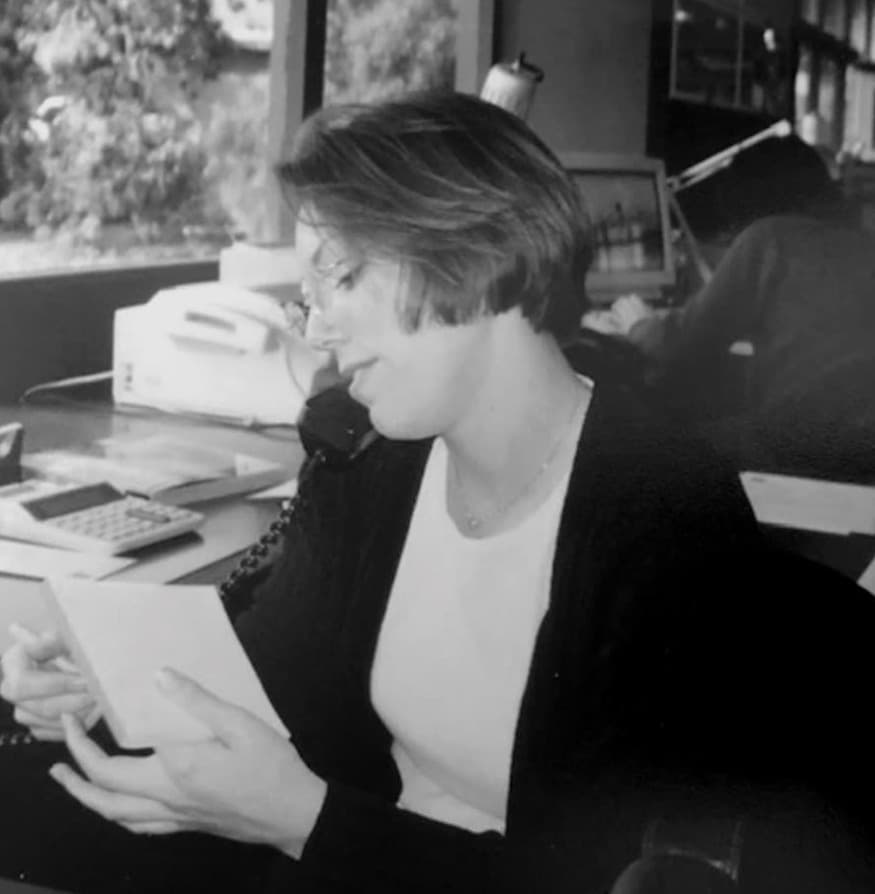 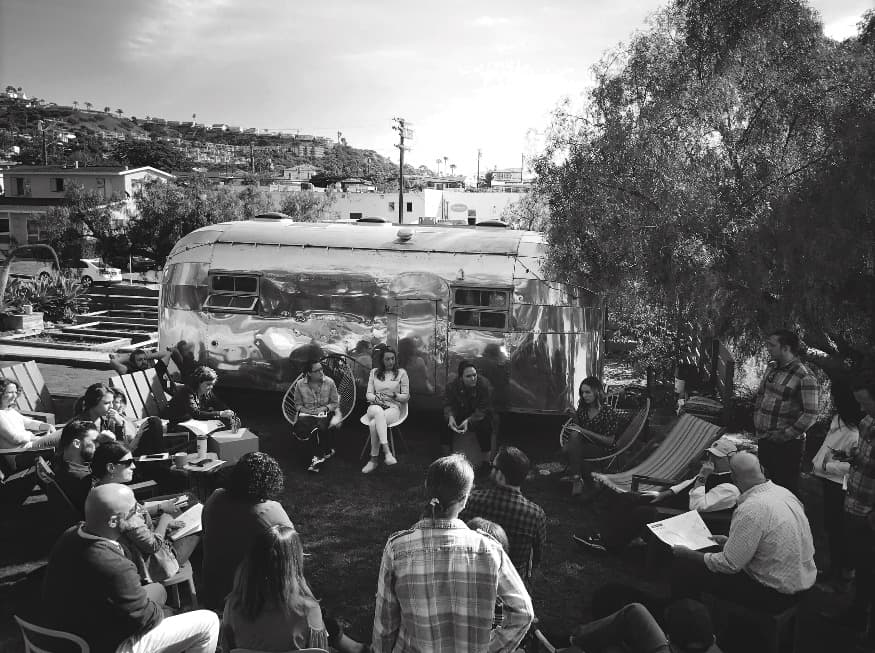 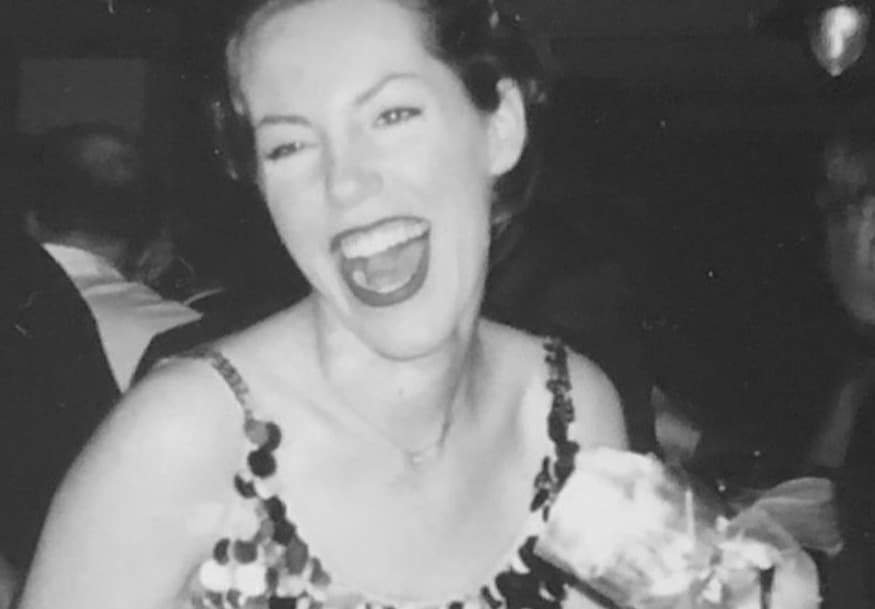 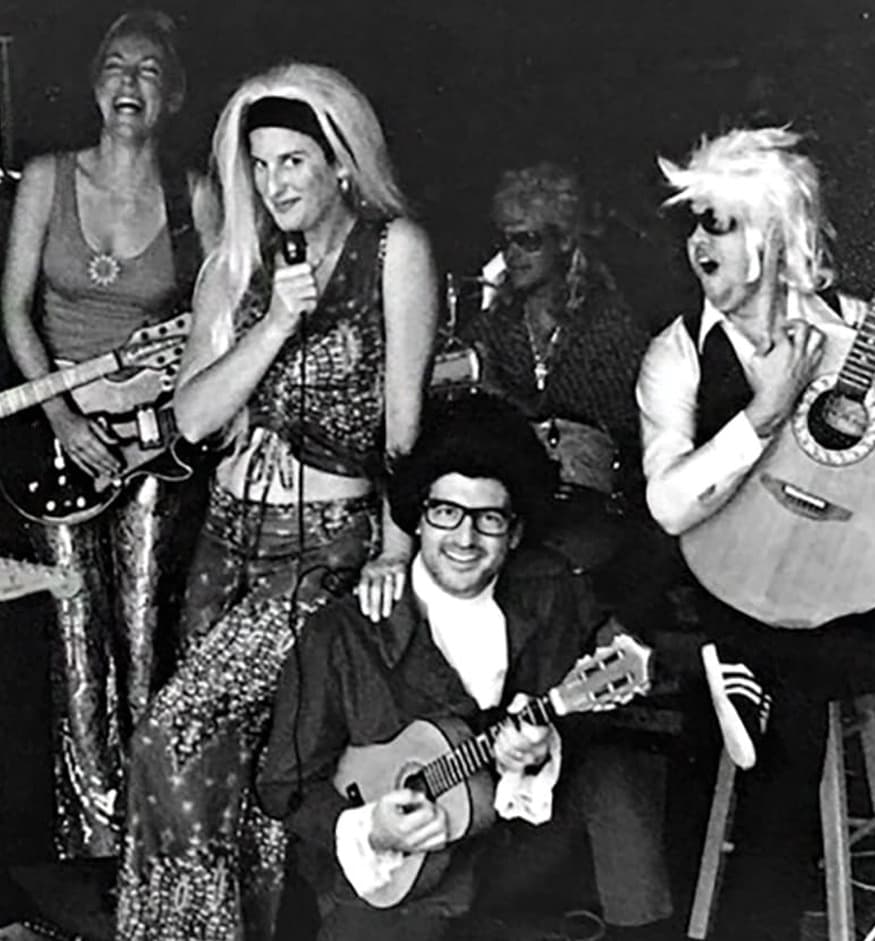 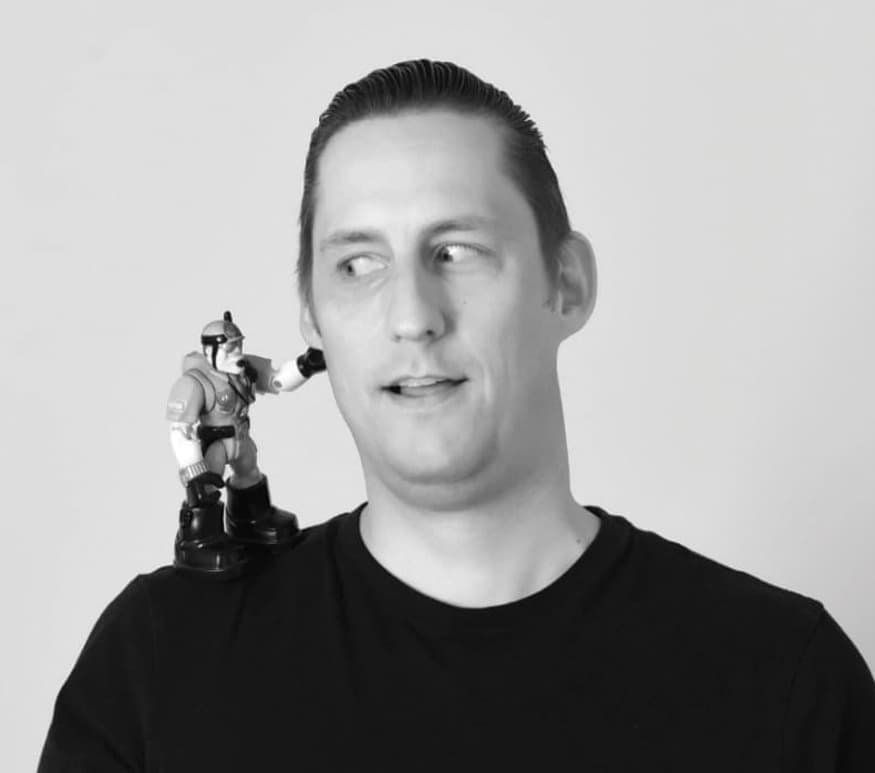 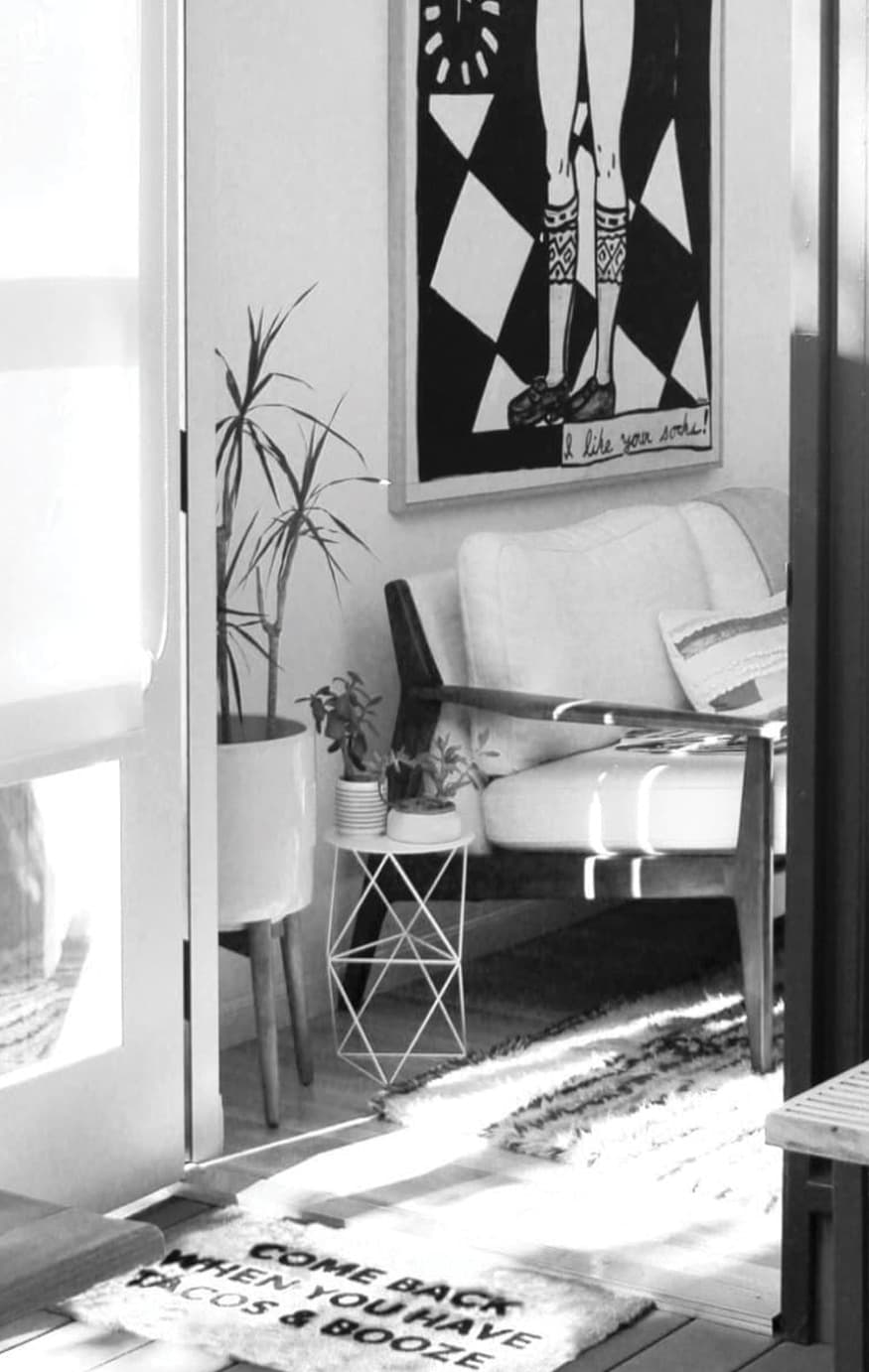 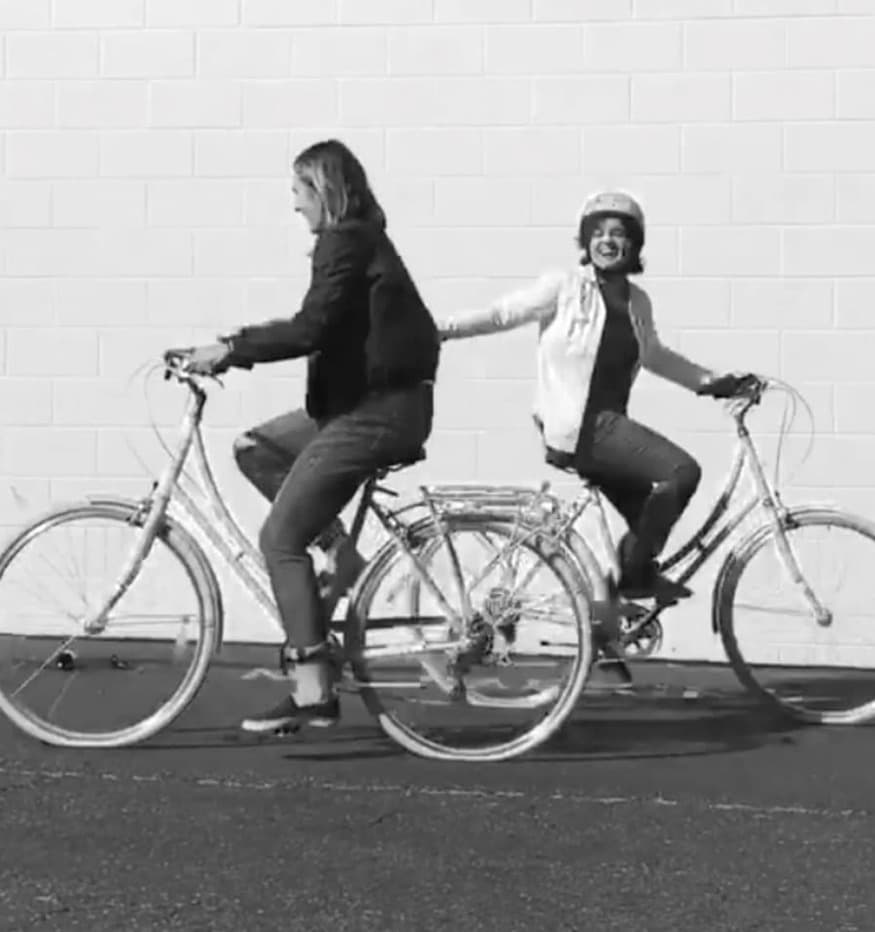 Redmond Schwartz Mark Design, now with a growing list of worldwide, high-profile clients, could no longer operate out of a garage apartment. Discovering a hidden gem of a building near the beach designed by Korean architect Henry Lim, a protégé of Frank Lloyd Wright, Suzanne and Martin made a down payment with credit cards and secured a loan from a family friend who secretly hoped they’d default. They didn’t. In fact, they brought the dilapidated building back to its midcentury modern splendor and eventually purchased a nearby building and the two vacant lots in between to create an outdoor oasis and an inviting campus that attracts talent from near and far.

One such talent was a small-town athlete from Wisconsin who turned his attention toward visual arts when he realized he probably wouldn’t become the next LeBron James. Kyle Richter first studied photography at the Madison Area Technical Institute with a goal of moving to California to photograph professional surfers. He landed a dream internship at Surfer Magazine before riding the wave back to school, enrolling in the Art Institute of California Orange County to earn a degree in Graphic Design. After working at a couple of architecturally focused design groups, Kyle was drawn to RSM Design’s perfect blend of architecture and graphic design, not to mention the San Clemente office’s premier location near the scent of surf wax and suntan lotion.

Another vital recruit – Cody Clark – who had been called away from RSM for other pursuits, eventually finding himself back at RTKL as Vice President, Global Service Leader for EGD. But lacking what he missed most, deep meaning and friendships in and around what he created, Cody came 360 degrees back to 160 Avenida Cabrillo and is now at the helm of the Los Angeles office while Kyle leads the San Clemente studio and Harry the studio in Dallas.

Collaborating at the intersection of graphics and architecture. Innovating at the corner of integrity and trust. A group doing exactly what they set out to do when Martin scrawled his vision for the company on the back of a Southwest Airlines napkin – create great work, with great people, with great passion…